Opět jsem narazil na docela zajímavou pasáž v knížce a to bych nebyl já, abych se o ni nepodělil. Týká se filmu noir Edmunda Gouldinga Nightmare Alley (1947).
Nightmare Alley (1947) is the quintessential B movie spoiled by an A production. If the studio, Twentieth Century-Fox, had left well enough alone, Nightmare Alley would have been hard and nasty. Or if they had turned it into a full-fledged A project, it would have become a classic. Instead they went halfway and ruined it, the deprived bastard child of a millionaire. The amazing thing is that they didn't turn it into a mess.
You get a feeling, as you trace the changing facets of its production and view the end result, that everyone concerned with the movie recognized its power, although none could find the source. The entire project seems to have been shot through with bewilderment and a reluctance to follow any one lead to its conclusion.
(...)

Hollywood has always been scorned for turning great novels into lousy, botched-up movies. All you have to do is look at the 1930 version of Moby Dick to see why the industry deserved its bad name. But virtually nothing's been said about how Hollywood took the most awful novels and the world's worst prose and transformed them into perfectly dandy movies with brilliant craftmanship. (...) For Hollywood, the greatness of the book and the greatness of the movie are usually in inverse proportion.
(...)
Of course, Nightmare Alley might have been a great movie had Orson Welles gotten hold of it and transformed it slightly. It wouldn't even have needed transformation, just a shift in balance here, something accentuated there - the sort of thing Welles could have done brilliantly had he been more restrained and adaptable to the system, and had the system been less fearfully anti-intellectual and more accommodating. Imagine the subtlety and depth he could have added to the picture from his own profound knowledge of personal attachments: the constrictions and small cruelties we impose on people we "care" for in order to assert and maintain our dominance over them. At the same time, all of the intellectual pretentiousness, staginess and phony spontaneity that was soon to ruin The Lady from Shanghai (1948) could have been used to coat layer upon layer of irony.
MILLER, Clive T. "Nightmare Alley: Beyond the Bs". In: McCARTHY, Todd, FLYNN, Charles. Kings of the Bs: Working Within the Hollywood System. New York: E.P. Dutton & Co., Inc., 1975. str. 167 - 183.
Docela zajímavé postřehy, myslím. Od Edy čekám, že se proti poslední větě rázně ohradí. Nejlépe dalším textem v jeho wellesovském seriálu :) 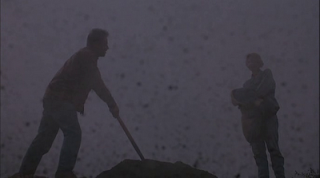